It’s been over five years since White Lung released any new material. After their explosive break-out album in 2014, Deep Fantasy, and the critically-acclaimed follow-up, Paradise, the punk band have taken a long yet unintentional hiatus. Now, singer Mish Barber-Way, guitarist Kenneth William, and drummer Anne-Marie Vassiliou are back with their latest release, Premonition.

The band returned to their long-time producer Jesse Gander (Japandroids, Brutus) to bring out the primal and anthemic punk rock the band built their following on. Chaotic, bold, and hook-driven, Premonition is a whirlwind of driving drums, intricate guitar work, and no-holds-barred lyrics about motherhood, pregnancy, and growth.

Critically-acclaimed author, poet, and Twitter personality, Melissa Broder (@sosadtoday, The Pisces, Milkfed) sat down with singer Mish Barber-Way to talk about the creative inspiration behind Premonition.

A lot has happened since you guys put out Paradise in 2016. How did Premonition come to be?

We ended our last tour in January of 2017 on a festival circuit in Singapore, Australia, and New Zealand. We were coming home and I knew there would be a bit of a break, but we were also starting to write songs. The following year, I started going back and forth from Los Angeles to Canada so we could start writing and recording our new album. That October, I was in Vancouver working on the album and one day I went to the studio to record and realized I hadn’t gotten my period in a few days. So, I decided I better take a pregnancy test. I showed up at the studio with my whiskey and my cigarettes, prepared to do my vocals, and I took the pregnancy test in the bathroom at the studio and it said I was pregnant. Holy shit! I immediately flushed the whiskey and called my sisters to bring me another test just to be sure. I was like, “Get me one of those digital Clear Blue tests. I don’t trust this one I took.” I went downstairs to the control room and told our producer, Jesse Gander, that I thought I was pregnant. My sisters soon arrived with the test and sure enough, it was positive. That afternoon, Anne-Marie came to the studio and saw my pregnancy test in the trash.

The funny thing was that this album was supposed to come out in June of 2019. Well, my due date was June 14, 2019. So obviously, we had to postpone. We thought, “It’ll come out in 2020.” Well, what happened in 2020? The world shut down. So, it’s taken years to finally get this album out. Then, I got pregnant again in the summer of 2020 and had my daughter. So, I had my son first, then my daughter, but that was the trajectory.

So, the album was written while you were pregnant with your first child, how did that change your process?

I was writing while I was pregnant with my son, not knowing that I was having a boy, so it was strange because it was the first time I had to write sober. It was sad that I had never sung a single vocal track without alcohol. I was also going through pregnancy hormones and major body changes. I felt like all my creativity was being sucked into the fetus. I couldn’t write. The words weren't coming to me like they used to. It was like this baby inside me was taking up everything I had. I was consumed. I became fixated on that feeling, so the album is about the transition to motherhood, pregnancy, and the massive life change that I embarked on during the lull between our last album. The first three songs were written, then I found out I was pregnant, and Premonition became about that.

Let’s talk about the first single, “Date Night”. The narrator is on a date with God, driving around L.A., and God is drunk and smoking, which is very refreshing because nobody smokes anymore. One thing I love about it is the exploration of your personal relationship to God. And God is kind of hot in this song! How was this song created?

When Kenny and Anne-Marie showed me this song I sat with it for a minute then the image of being in a Cadillac on a date with God just kind of popped into my head. I think I was also disturbed with the state of the world, and with Los Angeles and my life there. I felt like that part of my life was expiring, so I was projecting those angry and scared feelings out onto the city of L.A. because it’s safe and comfortable to live in your anger instead of being self-reflective. I was imagining driving around Hollywood with God like we’re in the flying car at the end of Grease and just asking him what he thinks about the world. God would be drunk and laughing and smoking and telling me what a joke we all are and how we screwed it all up. And, of course God is hot. I also imagined a God-sized match, lighting it and throwing it out the back of the car as the city burned. Maybe I was just saying good-bye to my old life, but it felt very fun and freeing.

I like your idea of fun. “Burn it all down!” I wanted to ask you about the song, “Bird”. It’s such a beautiful track. It’s this promise that you are making to your unborn child, and it’s such a beautiful promise because it’s the knowledge that one day the child will go through all the things a child and parent go through. But there’s this image of holding the child in the light, and you end the song telling your child that they are the “wild one”, so they are not at fault for any of this. Has your relationship to this promise changed now that your children are on the earth?

I wrote “Bird” after a flight from Los Angeles to Vancouver to record. It was the first time I felt my son kick. I don’t know if it was the airplane or what, but it was a moment. It felt like there were guitar strings across my womb and he was plucking them. I imagined the baby’s tiny feet dancing on the strings. I was really just trying to imagine the feeling of what it would be like to first meet my baby and know that I get to care for this person for the rest of my life. There’s also the contrast for the child of the dark womb then being blasted with the cold, white light of the world and they only know you. You are what they know and can cling to in this strange new place. It is a romantic love song for my children. I think my relationship to the words is now stronger, because all the feelings came true.

I love the song “Girl”. When I read the lyrics I thought, “Can you be my mom?” Just the thoughtfulness, the protectiveness…what an incredible punk expression of fierce, unwavering maternal love. You make maternal love very fierce. The song is filled with words of caution and preparation about the hell that likely lies ahead whether it be middle-school, high school, or just life. You mentioned you wrote this song two years before you had your daughter, so was this actually a cautionary tale for your younger self?

I think whenever you write cautionary tales for other women or fierce, protective songs, you are almost singing it to yourself in a weird way. But, as I said, when I was pregnant, I did not know the sex of the baby. Kenny presented this song and it was so driving, so short and fast, and the words just spilled out of me. I was trying to jam everything I would want to teach my daughter into a very short two-minute punk anthem.

Audio Clip: Mish tells the story of nearly birthing her daughter on the freeway.

The basic gist of this whole album is that I wrote it during a huge transitional time in my life. As I said, I was very, very consumed and sad about not being a mother yet from around the time we toured our last album.

How old were you?

You knew you wanted motherhood.

Yes. I also knew I wanted more than one child and so I knew that I had to have my first child by at least 33 or it wasn’t possible... and even that was pushing it. As a woman, you have to be realistic about your biology. I’ve already exhausted a lot  of myself touring and partying and throwing myself around on stage. I sucked up those good fertile years being wild. I had to take that into account.

In retrospect I realize how much I thought about [having a family] and how much it contributed to my sadness for years. I didn’t really realize what was missing in my life. For some people, this will never be an issue…and that’s fine. I’m not saying everyone has to do this, but for me, it was a huge thing that was absolutely eating me up. I am really glad that I didn't push those feelings away. Having my family is a joy. It has given my life an awesome responsibility and meaning that I never could have achieved through any other means. I think of the world much differently now that I am a parent.

Audio Clip: Mish and Melissa discuss death, family, expectations for females, and ask if anything is ever 100 percent.

For this record, you guys went back to your producer Jesse Gander who did all your previous albums, including Deep Fantasy. I’m wondering if that primal aesthetic reflects the experience of motherhood and why you went back to your long-time producer?

We love working with Jesse. He has known our band through our entire existence. The intimate story of pregnancy on this album also deeply involves Jesse… he was the first one to know I was pregnant, before my husband!

We wanted to return to our punk roots as far as production goes, but we also wanted to take our time and record in chunks. Paradise was made in Los Angeles under a tight time limit and Lars Stalfors did an incredible job polishing those songs with us into beautiful, gritty glitter, but this time around we wanted to be able to enjoy the luxury of time…and that really is an understatement considering how long it has taken this record to finally come out. Kenneth went back and did a lot of guitar work. Sonically, this is a very busy and complex record. This album on a whole is very journal-esque. I needed to barf it out and be uncool. Afterall, I’m a mom now. It’s alright to be uncool. 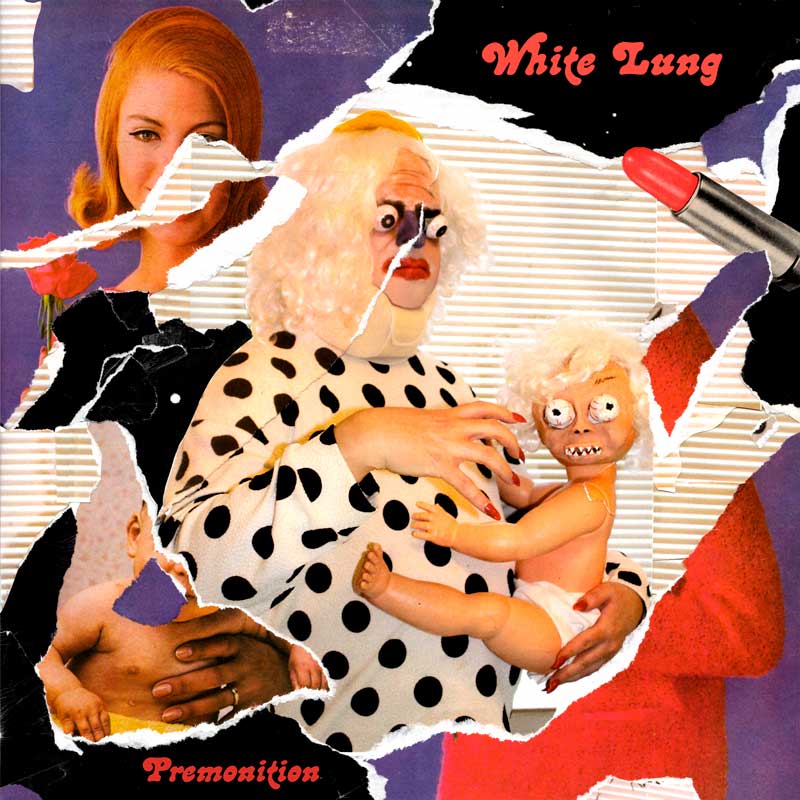